*NEW* The Firefighter and the Marine cast of characters

Shade has been kept in the dark for eight long years. Now he’s facing a world that terrifies him. A world that seems to hold no place for him.

When the authorities are unable to find a home for Shade, Penny, reluctantly accepts him into the secure school she manages, despite thinking it’s the wrong place for him. Penny fears for his safety among the other troubled children. In an attempt to forestall the disaster she predicts will happen she appoints one of them as his champion.

Dory, an engaging seventeen year old with mental health issues, is proud to be chosen as Shade’s champion and throws his heart and soul into the job. In doing so he is forced to face the thing he fears most – his own emotions.

An unexpected friendship begins to grow into something more, until a spiteful act tears them apart and leaves them broken.

When Dory falls ill, Shade is forced to face his demons and struggles to find the strength and courage he needs to fight for the right to love, and to be there for his champion when he needs him most.


Excerpt:
"Dorien...." Richard was looking at him in such a strange way it made his stomach feel tight. It was never good when they called him by his full name.

"Oh, nothing, nothing. Penny trusts you, Dory, and I'm not saying I don't but... Shade's got a lot of problems, serious ones, He's very confused right now and it would be easy for there to be... misunderstandings."

"It's okay, Rich. I know the score. I promise I won't make a move on him. I'm not that bad. I can control myself, you know."

"I know that, Dory but.... Dammit. I'm not supposed to tell you this but I really think you should know. Shade tried to kill himself, and he still wants to."

"Oh." Dorien put a hand over his mouth and suddenly felt breathless. "Do you think he might... might... try?"

"Yes, I do. We're taking every precaution we possible can, but we really do need someone to watch him all the time. There should always be a member of the staff very close by, but no one can watch him every minute."

I can. I will. Penny said there was no responsibility, but I can do it. I can take responsibility. Rich,, I didn't think I could, but I can. I can't go through all my life being taken care of and protected. I have to face reality sometime, and I guess this is it. I'll be Shade's champion, and I'll take care of him. I promise. I won't let him hurt himself, and I won't let anyone else hurt him either."

Rich looked stunned, and Dorien didn't blame him. He was quite stunned himself. He hadn't meant to say those things, they'd just come out.

"No one is expecting you to take responsibility, Dory. Just keep an eye on him, okay?"

"Off you go then. Max is waiting for you."

Dorien raced through the house towards the boys' bedrooms, his heart thumping. No matter what Rich said, he knew this was a huge responsibility. He had someone's life in his hands. Jesus. Suddenly he froze and panicked. Backing against the wall, he closed his eyes and gasped for breath. He couldn't do this. There was no way he could do this. He was Dorien, the screw up, the freak, the nutjob. he couldn't be trusted with his own life let alone someone else's.

Waves of panic washed over him, and he desperately worked through the exercises his psychiatrist had given him for controlling his emotions in cases like this when they threatened to get completely out of control. 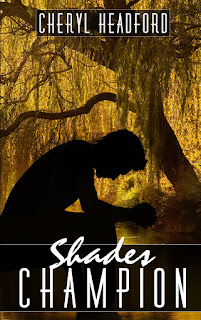 Cheryl was born into a poor mining family in the South Wales Valleys. Until she was 16, the toilet was at the bottom of the garden and the bath hung on the wall. Her refrigerator was a stone slab in the pantry and there was a black lead fireplace in the kitchen. They look lovely in a museum but aren’t so much fun to clean.

Cheryl has always been a storyteller. As a child, she’d make up stories for her nieces, nephews and cousin and they’d explore the imaginary worlds she created, in play.

Later in life, Cheryl became the storyteller for a re enactment group who traveled widely, giving a taste of life in the Iron Age. As well as having an opportunity to run around hitting people with a sword, she had an opportunity to tell stories of all kinds, sometimes of her own making, to all kinds of people. The criticism was sometimes harsh, especially from the children, but the reward enormous.

It was here she began to appreciate the power of stories and the primal need to hear them. In ancient times, the wandering bard was the only source of news, and the storyteller the heart of the village, keeping the lore and the magic alive. Although much of the magic has been lost, the stories still provide a link to the part of us that still wants to believe that it’s still there, somewhere.

In present times, Cheryl lives in a terraced house in the valleys with her son and menagerie of three cats, a dog and a dragon. Her daughter has deserted her for the big city, but they’re still close.


Immersed, as always, in the world of fantasy, she maintains a burning desire to share the stories and these days it’s in the form of books which all contain her spark and unique view on life, the universe and everything.

I normally place stories into 3 main categories; paranormal, science fiction and the rest go into a general fiction category.

That being said, I have had the honor and privilege of reading an advanced copy of Shade’s Champion and I can honestly say that it is the best piece of fiction I’ve ever read.

The characters and their situations are real enough to have been taken directly from newspaper headlines. What the two main characters have experienced in their pasts are, in the case of Shade, horrifying, and in the case of Dory, not as uncommon as we would wish.

I can definitely identify with Shade as we have both had similar life experiences. I’m sure there are readers out there that can identify with both Shade and Dory. Within Shade and Dory Ms. Headford has created multi-dimensional, complex and courageous characters. I personally question whether I would be able to show the same amount of courage facing my fears that Shade and Dory do. I would like to think so.

Readers will find themselves cheering for the main characters, applauding the strong supporting cast and booing the villains.

If you only read 1 book a year, make sure it’s Shade’s Champion.